I first met Scott Bainbridge in grade 7. I should have known then what an incredibly kind person he would become. Even back in middle school, when kids are often not at their best, Scott was kind, open, and welcoming. A quality he continues to show to humans and non-humans alike.

Scott’s love for animals began as a child living in rural Northern Alberta. His family lived in a small town where unfortunately, farm dogs were abandoned once they had outlived their usefulness. Scott would do his best to care for them.

Scott turned his desire to help animals into a career. In 1999 he became a veterinarian. He had initially hoped to attend vet school much sooner but did not receive the high marks required. Instead, he went into advertising sales for four years and then eventually returned to school to upgrade his marks and take another shot at his dream.

It all worked out. He now co-owns, Dundas West Animal Clinic (DWAH), located in Toronto, Ontario. DWAH has been nominated as Toronto Star’s Reader’s Choice Award for Best Veterinary Clinic and is currently named top vet clinic in Toronto by Now Magazine. 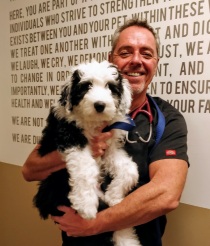 Scott is also the resident vet on Global TV’s “The Morning Show”. He appears on a regular basis answering pet related health questions for viewers.

In addition to helping his many patients, Scott makes time to help animal rescue and adoption groups. He works closely with Toronto Cat Rescue, Team Cat/Dog Rescue, Black Dog Rescue, The Moosonee Puppy Rescue, Adopt A Dog Save A Life, GINA (Greyhounds in Need of Adoption) and Sistering—a shelter that helps marginalized women and their pets.

And for the past ten years, Scott has been running his own DWAH in-house cat adoption program. He thinks they have placed hundreds of stray cats and kittens into their forever homes.

Scott loves the challenges of being a veterinarian. He compares his job to that of a pediatrician since his patients are unable to communicate what is wrong with them, which means he has to rely primarily on his diagnostic skills.

Recently, Scott and his family bought a vacation home in Ecuador. While most of us would take the opportunity to relax, Scott noticed the number of stray cats and dogs. Not only did he notice the problem, he decided to do something to help. Veterinary services are scarce on the Ecuadorian Coast and unfortunately, most local people cannot afford to spay or neuter their pets. He, along with a team of veterinarians, technicians, and assistants from Dundas West Animal Hospital have agreed to work with a registered charity C.A.R.E (Coastal Animal Rescue of Ecuador) and travel to Ecuador to assist with a spay/neuter clinic in the coastal town of Montanita in February of 2020.

On a personal note, Scott counselled my family a couple of times on how best to help our ailing pets. He also generously allowed my daughter to spend a day at his clinic, shadowing the vets, so she could get an idea of what it would be like if she became a veterinarian.

I am so honoured to call Scott a friend. There is no end to his kindness. I hope you will check out his GoFundMe page and donate whatever you can to help Scott help the stray dogs and cats of Ecuador. Just like there is no act of kindness that is too small for the animal or person receiving it, there is no donation that is too small.

And to help spay and neuter the cats and dogs of Ecuador, please check out: